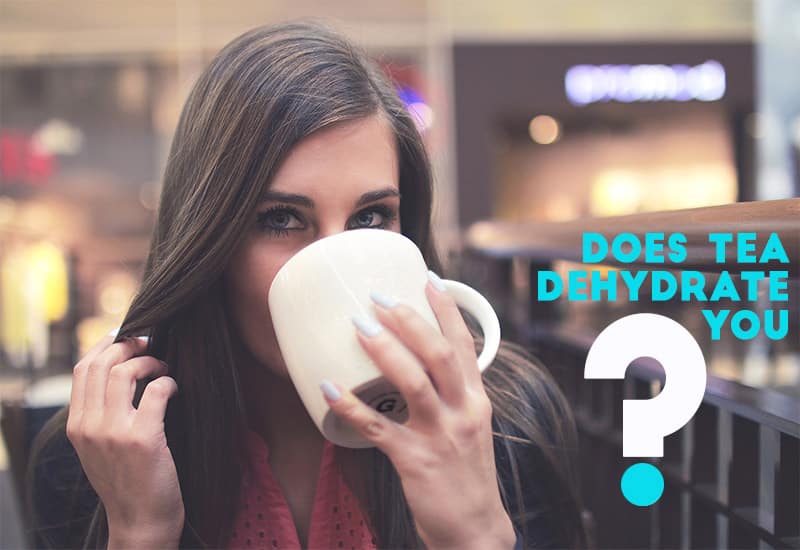 Tea is among the top universally loved drinks, with many people starting their day with their favorite cuppa. In addition, this beverage is believed to contain health benefits. At the same time, though, there is a belief that tea can be dehydrating.

So, is tea dehydrating? If so, what are the reasons? Do all teas dehydrate at the same levels?  We explore the various facets of tea and demystify the myths and facts surrounding tea for hydration.

The caffeine content in tea is considered to be dehydrating. Therefore, people sensitive to caffeine try to avoid drinking this beverage.

But, if you are looking for hydration options that do not contain caffeine, we have something for you towards the end of this article.

Table of Contents hide
1 Does Tea Dehydrate You Really?
2 The Effect of Tea on Your Hydration Cycle:
2.1 So, What exactly is a Diuretic?
3 The different types of tea and their hydration levels:
4 Does Iced tea dehydrate you?
5 Does tea count as water?

Does Tea Dehydrate You Really?

Tea is the second most-consumed drink worldwide after water. According to a 2021 report published by Statista Research Department, the 2020 world consumption of tea stands at 6.3 billion kilograms.

Drinking tea has many beneficial effects on tea drinkers.

No wonder then that tea has been so popular since ancient times and continues to be a drink of choice for most people.

But then caffeinated drinks such as tea and coffee are unpopular for dehydrating your body.

So, is tea dehydrating? To understand whether this is a myth or a fact, let us know what happens when you have your cup of tea.

The Effect of Tea on Your Hydration Cycle:

Most teas, though not all, contain some amount of caffeine in them. This caffeine is also a standard ingredient in coffee, certain energy drinks, soft drinks, and chocolates.

After you have your cup of tea, it goes through the process of digestion and absorption and reaches the bloodstream. From there, it makes its way to the liver where it undergoes further metabolism or breakdown.

Caffeine exhibits various characteristics post the breakdown process. A 2015 article published in the journal “Current Neuropharmacology” details the various properties exhibited by caffeine that include:

The last point is of significance to us since we are talking about hydration by tea in this article.

So, What exactly is a Diuretic?

A diuretic is a substance that encourages your kidneys to produce more urine by increasing the amount of blood flow.

In effect, caffeine does cause your kidneys to produce more urine. But how much caffeine is needed to cause dehydration?

A 2014 article published in a journal called “Plos One” explains the relationship between dehydration and coffee intake. According to this article, “When consumed in large doses (>=500mg), caffeine elicits a diuretic effect”.

Interestingly, all types of teas do not contain the same amount of caffeine. Additionally, the caffeine content in tea also depends on brewing temperatures and conditions.

Let us take a look at the different types of teas, their caffeine content, and how dehydrating they can be on your body. The different types of tea and their hydration levels:

As we have seen above, just an intake of caffeine doesn’t cause you to get dehydrated. Instead, you must consume large amounts to experience the diuretic and dehydrating effects.

The globally available teas can be classified into four different types:

The most common teas with a significant amount of caffeine include black tea, white tea, green tea, and oolong tea.

These caffeinated teas are made from the leaves of plant species called Camellia sinensis. With these teas, you will get about 20 mg of caffeine from one gram of tea powder. A standard cup of tea (240ml) will contain about 40 mg of caffeine. [Source]

That being said, the caffeine content in tea can vary with the following factors:

Different batches of the same tea type will have varying caffeine contents based on factors such as the harvest time, quality of the produce, processing time and temperatures, etc.

At the end of the day, though, a strongly brewed cup of tea will contain not more than 200mg of caffeine. To put it in perspective, tea is one of the beverages that have the least amount of caffeine.

This fact is supported by an article named “Caffeine Content of Brewed Teas” published in the journal “Analytical Toxicology.” According to this article, “Brewed Tea contains less caffeine per serving than brewed coffee.”

This means that drinking tea will not cause you to experience the effects of dehydration unless you are consuming, let’s say, 12 to 13 cups of tea, which in our opinion, is excessive and impractical.

Herbal teas are quite popular with health and fitness enthusiasts and are a trending health and wellness beverage across the world.  Is herbal tea dehydrating then?

Teas such as chamomile, peppermint, hibiscus, ginger, and rosehip are popular herbal teas. These aren’t obtained from the Camellia sinensis plant. Instead, they are produced from the various parts of their respective plants.

As a result, they do not contain any amount of caffeine and do not count as diuretics. On the other hand, they can actually hydrate your body since they are herbal infusions in water.

When you drink herbal tea, you are having a cup of water with herbs in it. The herb is flavoring your water, making drinking herbal teas equal to drinking water.

Teas such as yerba mate, guarana, yaupon, etc., are a type of hybrid herbal infusions. They are not produced from the Camellia plant but do contain a certain amount of caffeine.

The caffeine content in these teas is much lesser when compared to caffeinated teas. As a result, they do not show diuretic effects. On the other hand, they may hydrate your body.

These teas are a blessing for tea-lovers who want to avoid caffeine intake. Decaffeinated teas contain less than 12gm of caffeine, making them absolutely safe as hydrating agents.

Does Iced tea dehydrate you?

The answer to this question remains the same. The caffeine content isn’t high enough to cause you to urinate more than normal, which means that, no, ice tea doesn’t dehydrate you.

While different teas may have different levels of caffeine, we can easily conclude that tea doesn’t cause dehydration unless you are consuming multiple cups of tea throughout the day.

When you consume limited amounts of tea, your body absorbs the necessary fluid content and throws the excess fluids in the form of urine.

But then, why do some people complain of headaches after consuming tea? The simplest explanation is that they are sensitive to the caffeine content present in tea. This is precisely why many tea drinkers are favoring a shift towards herbal and decaffeinated teas.

We do understand though, that tea is indispensable for some, despite effects like headaches. If you love your tea too much and can’t let go of it, ensure that you stay hydrated with natural electrolyte drinks such as coconut water.

Does tea count as water?

Nearly 60% of the human body is composed of water, and you must stay constantly hydrated to ensure that your body is functioning to its full potential.

To stay adequately hydrated, you must drink a minimum of 8 glasses of water and fluids per day.

So does tea count as a hydrating fluid?

A few years back, the general belief was that tea has caffeine with diuretic properties and can dehydrate the body. Consequently,  drinking tea will cause you to lose water content and essential minerals through increased urination.

On the contrary, as discussed above, the caffeine content in a few cups of tea (4 to 5 per day) isn’t high enough to cause dehydration.

Also, herbal and decaffeinated teas actually act as hydrating agents. As such, a cup of tea can equal a glass of water, adding to your body’s hydration.

Still, if you want to avoid teas due to reasons such as being sensitive to the caffeine content in tea and are looking for alternative delicious drinks to help you stay hydrated, electrolyte drinks can be an excellent alternative.

These drinks are water infused with various minerals and vitamins vital for maintaining the body’s homeostasis and proper functioning.

If you stay in hot and sweaty climates or are looking for fluid replacement options during or post-workout, sporting, running, or athletic events, electrolyte drinks, and sports drinks are an excellent healthy way of maintaining your hydration levels.

So, does tea dehydrate? Despite the widespread belief that tea is dehydrating, the current research states that it doesn’t cause dehydrating effects in all instances.

The caffeine content in teas isn’t high enough to trigger increased urination due to quickened functioning of the kidneys. On the contrary, teas with low caffeine content, such as herbal teas, are an ideal and tasty way of staying hydrated.

Can Dehydration cause Kidney Pain?

Dehydrated Tongue: Is White Tongue a Sign of Dehydration?

How Long Can You Live Without Water? It’s Fact Time!

How to Prevent Dry Mouth While Sleeping?

Does Salt Dehydrate You? Find Answers To All Your Salty Questions!

Waking Up Dehydrated? Reasons & How You Can Fix It

Does Milk Hydrate You? Know The Answer

Can Dehydration Cause Joint Pain? Lets End the Debate

How Long Does It Take to Rehydrate?