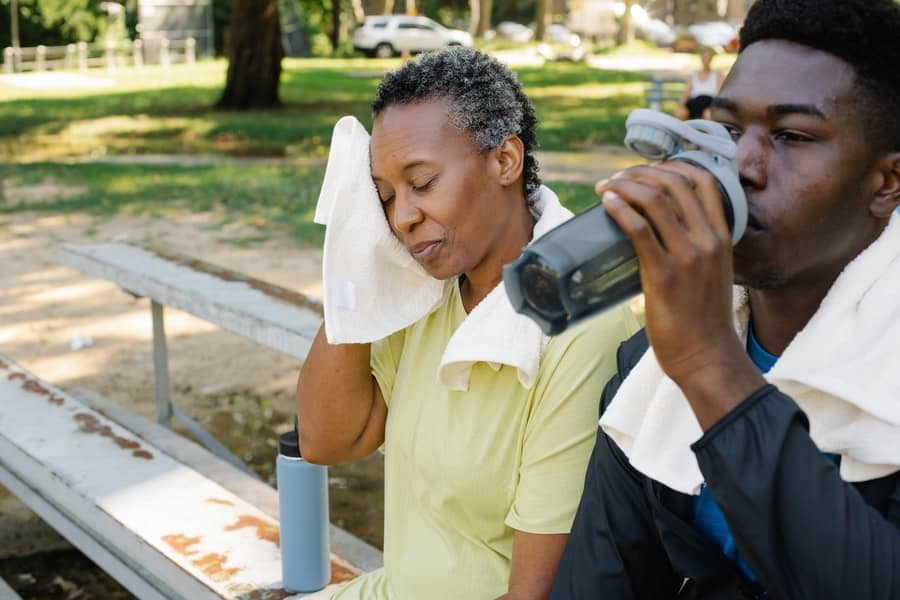 We all know about dehydration. Doctors tell us to drink 8 glasses of water a day, even though it’s probably a myth.

But we rarely talk about overhydration. It’s when we drink more water than necessary, which leads to loss of essential electrolytes from the body due to excessive urination.

What happens if you drink too much water?

And will the excess peeing hamper your sleep?

Well, the latter is for sure! But most importantly you need to know how to fix overhydration.

Keep reading while we answer your questions!

Overhydration, also called water intoxication or hyperhydration, is a condition that occurs when the body has absorbed too much water. It can be caused by drinking large amounts of plain water in a short period of time or by drinking excessive amounts of fluids that contain high levels of electrolytes, such as sports drinks and energy drinks.

This is when you consume more water than the amount your kidney can filter and excrete through urine in a day.

It can happen even by drinking 8 glasses of water a day, because that may not suit everyone.

This is when your body starts holding fluids. It can be because of liver problems, diabetes, anti-inflammatory drugs, and heart failure as well.

In both cases, you tend to develop the condition Hyponatremia.

Fluid levels in our body are exquisitely controlled by a series of neural and hormonal feedback loops involving receptors called aquaporins and the anti-diuretic hormone known as arginine vasopressin. Osomosensors in our oesophagus and stretch receptors in our stomach all contribute to maintaining the water and salt balance.

Overhydration results when we either consume too much water or our body fails to excrete sufficient amounts of water. These include

One symptom of overhydration is pretty clear: you will pee more often than not. And this may not sound very troublesome yet.

Here are three ‘drinking too much water symptoms’ that are sure to disturb your life if you don’t take care of them immediately.

1) Your urine is colorless.

Experts say that your urine should not be too yellow as it is a sign of dehydration. And to prevent dehydration, you may end up drinking more water than necessary.

When you do that, the number of your pee sessions will increase and your urine will become clear instead of being slightly yellow like it should be. That’s the sign you need to stay clear of.

2) You experience fatigue and muscle cramps.

Sodium plays a significant role in keeping our muscles healthy and other energy levels high. But when you suffer from overhydration, you basically suffer from Hyponatremia. The condition arises when your blood has low (diluted) amounts of sodium.

It’s because we lose a good chunk of our sodium reserves through sweat and urine. Since you drink too much water, your increased urine sessions encourage the body to throw out the sodium.

Low sodium leads to low energy causing fatigue, and other problems like muscle spasms and cramps. At a severe stage of this condition, you may even experience seizures or go into a coma.

All these symptoms of overhydration – be it vomiting or lightheadedness – cause you trouble mostly in severe cases only.

So, if you are experiencing these issues and can’t seem to put a finger on any other cause, it’s likely due to overhydration and you need to check with your doctor as soon as possible to put a stop to it.

The reason behind these issues is electrolyte imbalance. Sodium is one of the most essential electrolytes that gets diluted in your bloodstream when you drink water excessively.

Since sodium has a crucial role to play for the better functioning of your muscles and nerves, it is important that we keep it in check.

Also Check: ORS – What is it, Usage, Benefits, Side Effects

How to fix Overhydration?

Overhydration can often be worse for the body than dehydration. If not treated swiftly it can lead to water intoxication and even be fatal

How to fix Overhydration immediately?

One of the best immediate solutions is to not drink water /fluids unless you are actually thirsty. If you feel thirsty all the time, try to delay consuming liquids a bit and consult your doctor.

If meeting a doctor is not possible at the moment, consider other home remedies.

Firstly, whenever you notice colorless urine, reduce fluid intake and get the urine back to the slightly yellow color.

Next, you can try diuretic drinks like coffee. However, coffee does not dehydrate you unless you have about 4-5 cups. And there’s a chance you may end up overhydrating yourself instead. So, try consuming coffee powder instead.

Apart from that, you can try diuretic foods like garlic, onion, celery, and bell peppers or electrolyte food like cheese to replace the lost sodium.

How can Overhydration be Prevented?

As the saying goes, prevention is always better than cure.

Here are some simple and effective ways to prevent overhydration

How to fix an overhydration headache?

You get nauseous or experience overhydration headaches due to an extreme loss of sodium from the body through excessive urination and sweat.

If you can replace that amount of sodium somehow, you may be able to get rid of that painful headache. One way to do that is by consuming electrolyte drinks nourished with sodium.

How long does it take to fix overhydration?

The treatment depends on age, sex, a person’s health levels, activity levels, and the cause behind overhydration. The severity of the condition is a big factor too.

Therefore, the time to fix overhydration may vary between a few hours to several days according to these factors.

People who are at a low severity level may be able to fix it through home remedies, while others may need extensive medication.

Here are some overhydration myths you should be aware of

The science shows that thirst is a great barometer of whether you should drink water, and is not always a sign of dehydration. Dehydration typically sets in if you ignore your body’s thirst for an extended period of time.

Feeling thirsty can also be an effect of stress, medications or diabetes. Believing this myth often makes us overcompensate the other way by drinking too much water, leading to overhydration

Water is essential for our bodies. Up to a certain limit, usually 3.7 l for males and 2.7 l for females, as recommended by the Mayo Clinic. Again, needs vary among individuals and across situations. The data unequivocally shows that drinking beyond that leads to overhydration, water intoxication and hyponatremia.

It is certainly true that our bodies lose a lot of water during heavy exercise. However, when we sweat, salts and electrolytes are also lost in copious amounts. Drinking to replenish water without addressing electrolyte balance is a surefire recipe for overhydration as well as hyponatremia.

Many of the foods we eat, especially fruits and veggies, are packed with water. Not factoring in this may cause us to consume excessive amounts of fluids and enter an overhydrated state.

So much focus has been given to the adverse effects of dehydration(and rightly so) that most people are unaware of the perils of overhydration or even that it is possible. The truth is that overhydration can be worse for the body than dehydration and may even be fatal if not properly managed.

Now you know what happens when you drink too much water.

Whether you drink extra water to avoid dehydration or you do it because you are always thirsty, you are very likely to suffer from overhydration. And that brings with it the condition of Hyponatremia.

Hyponatremia is when your body doesn’t have enough sodium to function. Thankfully, this sodium – like all other electrolytes – can be replaced with ease through an electrolyte solution.

But how to fix overhydration permanently? If you find no good results by consuming electrolyte food and drinks, what you need to do is consult a doctor and find the right solution to this issue.

Can overhydration make you dizzy?

Yes, overhydration can make the brain cells swell and increase the pressure on the brain causing a headache. This results in mental confusion, disorientation, and difficulty in maintaining balance while walking. This imbalance in walking makes you feel dizzy. Another reason for feeling dizzy is the loss of sodium from the body due to overhydration, urination, and sweating. This state of hyponatremia also makes the person feel nauseated and dizzy all the time.

There are mixed opinions about the role of salt in hydrating and dehydrating the body. Salt is important to create the balance of water in your body so yes, salt may help in overhydration but taking salt as it is can be dangerous as well. To treat overhydration, taking salt from electrolyte drinks that are rich in minerals and are specifically made to replenish the lost minerals is your best bet.

How do you fix overhydration quickly?

If you are overhydrated, then stop drinking plain water and switch to some diuretics that help in increasing the frequency of urination to eliminate the excess water from your body. Taking high potency electrolyte drink that has an increased amount of sodium is the perfect solution to replenish the lost minerals with overhydration and treat hyponatremia. Coffee is also a good alternative and drinking without thirst is not recommended at all, especially when you are overhydrated.

How much water a day cause overhydration?

Although it depends upon your overall health, gender, activity level and weather conditions, on average if a person drinks about 3-4 litres of water within 4 hours or so then that person is likely to become overhydrated. If you are a healthy active adult, even then your kidney can’t excrete more than 1 litre of water per hour at the max. So drinking about 2 to 3-litre water in a whole day is advised.

What are the 4 signs of overhydration?

Colorless urine is one of the most prominent signs of overhydration. Other common symptoms of overhydration are nausea, vomiting, headache, mental confusion, fatigue or drowsiness, etc. Many people who are consuming excessive water also experience muscle cramps frequently. As the pressure on the brain increases due to the swelling of brain cells, this water intoxication can be dangerous and even fatal if not treated well in time.