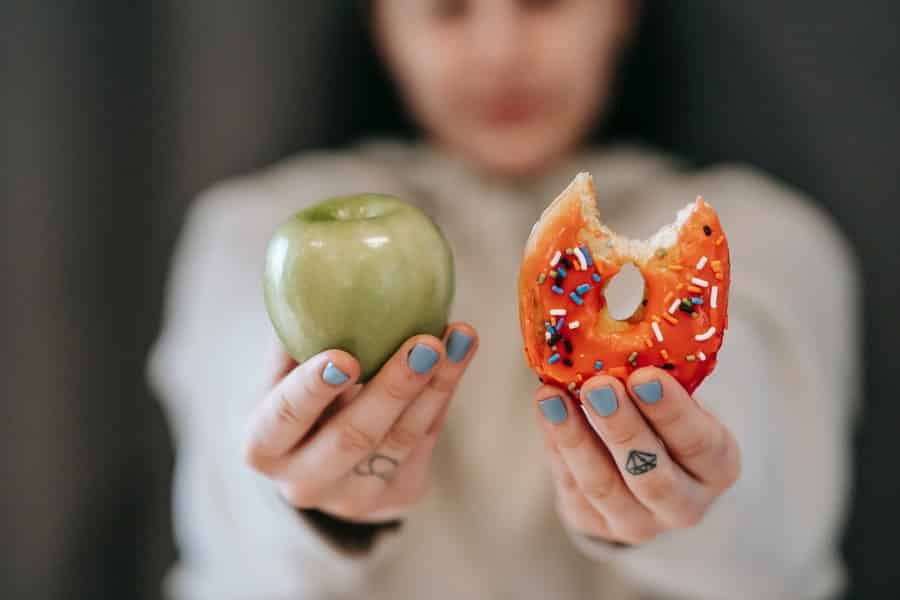 Are you obsessed with your weight or your body shape? Maybe you can’t stop once you have opened a pack of chips? Or do you vomit forcefully?

Whether you eat too much or too little, having any extreme eating habits is a sign that you may suffer from one of the many types of eating disorders. And that’s exactly what we are going to discuss in this article to help you understand your situation and see if you need to consult a doctor.

What Is An Eating Disorder?

An eating disorder is a type of mental illness that can lead to harmful eating habits. They could begin with an addiction to food or a lack of interest in eating.

Studies show that by the age of 20, up to 13% of teenagers have had at least one eating disorder.

Additionally, kids with these eating disorders can develop higher levels of functional impairment. They also experience more distress, suicidal thoughts, and have an unhealthy BMI.

7 Types Of Eating Disorders (With Symptoms)

There are many forms of eating disorders and body image problems that can affect people of all ages.

How many types of eating disorders are there, you ask? At least 7. And that with many potential unhealthy consequences.

It’s, therefore, crucial to diagnose the eating disorder and check its symptoms as soon as possible for early treatment. Start now with the list below:

Anorexia nervosa is a type of eating disorder involving excessive weight loss, starvation, and compulsive behaviours. It is of two types – one where the person restricts their diet and the second where they binge eat and then force vomit to lose the weight.

This type of eating disorder has very similar symptoms to anorexia nervosa.

However, people suffering from this do not have low body weight, rather they weigh normal or sometimes overweight. Yet, they have an unhealthy relationship with food that’s visible thanks to the following.

This is one of the most common types of eating disorders. Unlike the other two mentioned above, binge eating disorder doesn’t happen with a fear of gaining weight. Plus, it doesn’t involve any purging activities like vomiting as well.

However, it’s more dangerous than the other two types because it leads to chronic diseases like stroke.

If you see someone throwing out chewed and swallowed food, let’s say 30 minutes into the meal, they very likely have rumination disorder.

One of the new eating disorder types, rumination looks like acid reflux. But, it’s voluntary. It’s a rare behavioural issue that can develop in someone’s childhood or infancy, as well. A behavioural psychologist can help with the treatment.

If you can’t visit a therapist just yet, you can try the liquid diet and see if it works for you.

Have you seen someone eat chalk, dirt, or paper? You probably thought they were crazy. But all they have is the Pica eating disorder.

It can happen to both adults and children. And is pretty easy to identify, as people start munching on chalks, pebbles, ice, soap, hair, paper, cloth, and similar objects unconsciously and even start craving it eventually.

If you have been consuming non-food substances for a while now, your body may have already experienced some damage. So, make sure to visit the doctor to heal that damage.

To start healing today, you can consume some drinks to boost your immune system. Eating nourishing and fibre-rich fruits like watermelons may also help.

ARFID is a common disorder among infants and children. It is when the child refuses to eat due to a lack of interest in eating or certain smells, flavour, colour, temperature, or even texture of the food. Once developed, the disorder can cause problems during adulthood too.

People with ARFID almost always have low energy, so if that’s you, you can try energy drinks for weakness. Or drink smoothies made with your favourite fruits and vegetables. These can help ensure you have enough nourishment and energy to go through the day with this disorder. And that with your approved smells, taste, and other nuances.

Some eating disorders do not fall under the above categories. That’s because it’s difficult during the diagnosis to pinpoint any condition or the symptoms are at a low frequency or intensity. Therefore, such eating disorders come under OSFED.

Another condition called Night eating syndrome is when a person eats excessively during the evening meals. Or they wake up in the middle of the night regularly and eat.

There are many types of eating disorders that you may or may not be suffering from. It should not be difficult to diagnose them as many of them have any specific symptoms.

If you see any of the symptoms mentioned, make sure to visit a doctor and get your treatment. It’s necessary as many of these disorders can lead to medical complications. These include heart disease and nutritional deficiencies.

Also, share this article with any loved ones who might have any eating disorders, in your opinion. Help them out!

Brown Vs. White Rice — Which Is Better for Your Health?

Cloudy Urine: Causes, Treatments, and What Does It Mean

Weight Fluctuation: Why is it Concerning?

Dirty Keto vs. Clean Keto: Everything You Need to Know

Are Raisins Good for You ? 10 Amazing Health Benefits

10 Drinks That Make You Poop Immediately

Pickle Juice for Cramps: Does It Work?